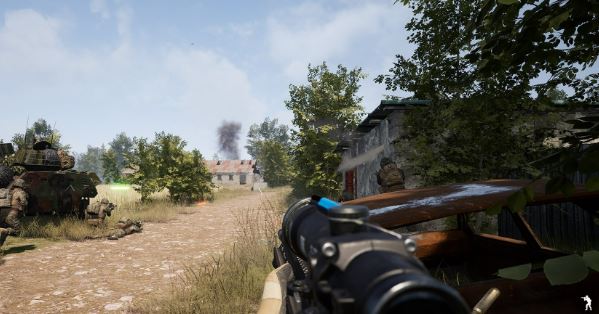 Squad is a tactical first-person shooter that provides authentic combat experiences through teamwork, constant communication, and realistic gameplay. It bridges the gap between arcade shooters and military simulation with 100 player battles, combined arms combat, base building, and an integrated VoIP system.

If that description doesn’t make much sense, then you’re not going to get along with this game. Squad takes military combat to the next level, so be prepared to put in the time or you won’t even make it to battle.

Squad has been around since September 2020, but with many PC games these days, it’s constantly evolving through updates and changes from developer Offworld Industries.

It’s certainly not an arcade shooter, like Battlefield or Call Of Duty. Try to be as realistic as possible, which is great if you’re looking for realism. The downside is that the learning curve is steeper, and just like with real world battles, you probably won’t see the enemy or who shot you!

I have hours into this game, and I still have no idea who I’m shooting at.

If you’re a lone gamer who doesn’t like interaction with others, this isn’t the game for you. The basic premise is that when you join a game, you need to be part of a squad. There are numerous squads within a single game, with each squad consisting of 9 players.

Although headsets aren’t required, you’ll find that if you don’t participate or talk to your squad members, there’s a good chance you’ll get “kicked” out of the game. If you’re happy to join and take instructions from your squad leader, then you should get along just fine, as long as you don’t mind the ‘adult’ language that is often shared.

Your gaming experience can be influenced by those around you, so one gaming session can be different from the next, both positively and negatively. After enjoying a close battle in one game, the next one may be a little less focused and a little boring.

The graphics are what you would expect from a game of this type, with random buildings and open areas to create different environments to fight over. Each soldier has 3 main positions, standing, crouching, and lying down, which sometimes means that when you want to peek over a wall, you can expose too much and end up getting shot.

Getting shot is something you’ll need to get used to if you’re new to the game, as seasoned experts will have no mercy in taking out amateurs. When you first join a squad, you get to pick a role, though you’ll find that all the “fun” roles will be taken and you’ll end up playing as a basic rifleman. This means that you will only have a standard weapon, which will feel underpowered.

The other frustration with ‘roles’ is that there will be areas of the game that aren’t open to you. For example, if you are a rifleman, you cannot drive a vehicle or fly a plane. Which can be very frustrating if you die and end up at base camp, with no means of getting back into battle other than to run, a long way!

This all sounds pretty negative, but as long as you understand the “rules” of Squad beforehand, you’ll have a better chance of enjoying the experience. If you are looking for a realistic co-op battlefield simulator then you need look no further.

Squad can provide hugely immersive gameplay, where you work with your squadmates to directly influence the progress of the fight. The game is based on the modern military, so whenever you feel like using today’s weaponry in dusty Middle Eastern environments, you’ll have hours of fun.

One aspect of the game that we cannot ignore is when you want to join a game. There is a server browser that lists game sessions, but most of them will have a queue or people waiting to join. This can lead to a considerable wait before you can join the game of your choice.

Overall, Squad can provide many hours of gaming fun, with many more free updates as the game evolves. It’s certainly not a game for kids, but if you’re a gamer over the age of 18, you can definitely get your military fix here. There’s no better feeling than sitting in a helicopter with a bunch of ‘friends’ as the pilot flies them straight into battle together. Another point is that the game is released on the Steam platform quite often, so you can get a few extra pounds off the price, not bad.