Scottish TikToker @glittergreigy has shared a short clip which has gone wildly viral, and deservedly so, with the description –

‘He thought about it for a moment .. he thought seriously.’

“Steven, I thought you were dead!”

She describes Steve as ‘the inhabitant of our garden, not our pet’, but he looks a lot like his own horse to us anyway. And he is perfectly healthy – he likes to lie down.

With more than 16 million views and three million likes, it’s been attracting a lot of comments too, and here are some favourites. 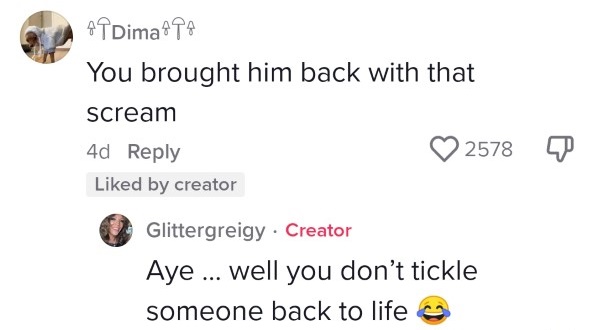 It was far too good to be covered by TikTok, so it found its way to Twitter, where it continued its viral journey.

Steven I thought you were dead pic.twitter.com/IKpXGIzTyo

This is my new text alert sound.
Why not send me a message to see if I’m standing close to anyone named Stephen?#AlsoWorkingforStevens https://t.co/a72kgngRmh

From now on, my favorite name for a horse is going to be Steven. And I’m going to pronounce it exactly like here: https://t.co/Ux1KeeEOcE

Jesus summons Lazarus from the grave.pic.twitter.com/tYYTAc3NBS

If it doesn’t become a trending TikTok sound, we’ll want to know why not.

Here’s Steve in a much earlier video, forgetting he’s Scottish.

WANT MORE POKE?
Get the best of the day’s posts delivered straight to you by joining The Poke+ on Facebook