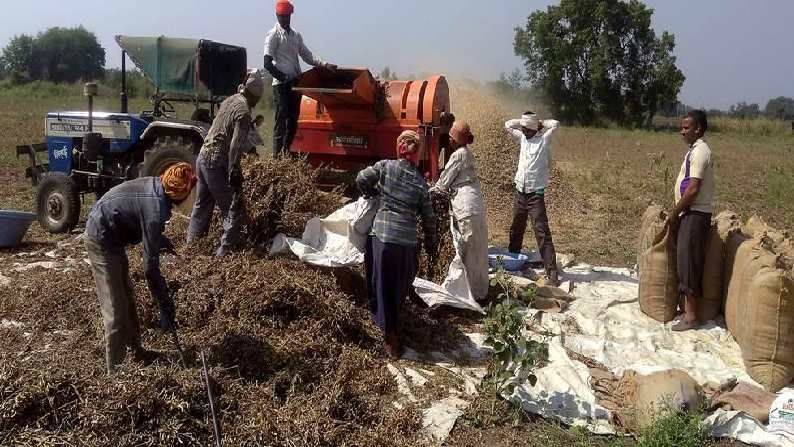 Latur: Soybeans, which get the highest yield from kharif, have a different story this year. This crop has been in crisis since sowing. Farmers are also facing many difficulties while harvesting. Harvesting of soybeans, which was delayed due to rains, is underway. Soybeans fetch Rs 5,000 in the market, while farmers have to pay Rs 5,000 per acre for the same soybean harvest. Therefore, the question before the farmers is how to do farming. Soybeans are still in the water due to rains. As a result, wages have risen. It is affecting the economy of the farmers. Therefore, agronomists are advising the farmers to complete the harvesting work with the help of machinery if possible.

As it will be active again from October 17, farmers need to focus on soybean extraction.
Every year the month of October is almost the rabbi season. This year, however, the kharif crop is still being harvested. Harvesting is also hampered by rains. The main crop, soybean, has been hit the hardest by the rains. In addition, farmers have incurred additional costs on this crop. At the beginning of soybean harvest, wages were around Rs 3,000 per acre, but now that the crop is in the water, wage rates are rising. Farmers have to pay Rs 5,000 per acre for soybean harvesting. So this year, the farmers feel that everything is in the water.

Production is also low this year

Marathwada produces 8 to 10 quintals of soybean per acre, so the area under soybean is increasing year by year. There was optimism that there would be a lot of production this year too. However, the rains have destroyed the entire Kharif. Soybeans have sprouted sprouts. Farmers are getting 3 to 4 quintals per acre. On the other hand, one has to pay Rs 5,000 per acre for harvesting.

Intended to clear the area for the rabbi

Farmers no longer have any hope of yield from soybean crop. Harvesting is underway with the sole purpose of clearing the area for the upcoming rabbi season. Even though soybeans are still waterlogged, farmers are focusing on harvesting. Because the rabbi wants to cultivate and sow in the season. Although it is currently raining, it is expected to be active again from next week.

It is important to sell soybeans without storing them

The formula of the market is that if the income increases, the rate will decrease. So many farmers may be thinking of emphasizing on soybean storage but storage will only lead to more losses. Because soybeans are soaked by rain. If stored in such conditions, soybeans are at high risk of rot. So it is necessary to sell it at the price you get. Moreover, farmers do not have space for storage, so if it rains in the future, the harvested soybeans will be damaged. Soyabean harveststalled, farmers suffer financial loss due to increase in wage rates, Farm labor rates increased

Take care not to get electrocuted… Important news for every farmer

Compensation to farmers in Osmanabad district