Kerala Chief Minister Pinarayi Vijayan on Saturday broke his silence on the Popular Front of India (PFI) violence in the state. 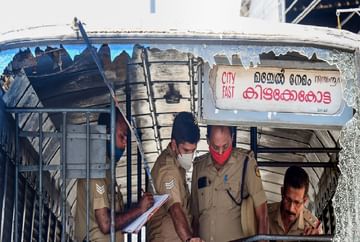 Chief Minister of Kerala Pinarayi Vijayan in the state on Saturday Popular Front of India (PFI) has broken the silence on the violence. They said that PFI The violence was already a plant. Condemning the violence, he said that it has caused significant damage to public and private properties in the state. The culprits involved in this will not be spared. Vijayan said, “Yesterday’s strike led by PFI witnessed plant violence in Kerala already. Due to this the state has suffered heavy losses. He said it was an attempt to destroy the peaceful atmosphere of the state and the guilty would not be spared.

Talking to reporters in Thiruvananthapuram, the Chief Minister said that most of the miscreants had come with their faces covered and caused great damage to public properties. All the accused will be brought before the law. He further said that the state has never witnessed violence on such a large scale in the recent past. We will not spare the criminals. Chief Minister Vijayan said that apart from those directly involved, we will also find out those who instigate such trouble.

At the same time, senior BJP leader and former Union Minister Prakash Javadekar said in this matter that the Left Front government is equally responsible for the violence on the day of the bandh. He told the media that raids were conducted in 15 states but such violence was witnessed in Kerala because the government remained a mute spectator. Javadekar said, ‘It was a dark day for the state. The goons were furious and they took the state for ransom and the government machinery was nowhere to be seen. How can the government turn a blind eye to such anarchy?

He said the ruling CPI(M) and PFI were gloves in hand. This is the reason why such large scale violence took place in the state. “If the government had been in the mood for strict action, this incident could have been avoided,” he said. PFI workers also bombed the RSS office in Kannur. Such acts would never have happened in the state without the tacit support of the ruling government.

On the other hand, the state’s Leader of Opposition VD Satisan has also criticized the silence of the CM, he said, the silence of the CM is really complicated. The government was unable to take action, so this kind of violence took place in the state. Meanwhile, the high court has asked the state government to submit a detailed report by October 17. Along with this, it has also been asked how she is planning to compensate for the huge loss caused during the bandh. The court said that strict action should be taken against those involved in the violence without any delay.

The PFI had announced a strike in Kerala on 23 September and during this there was widespread violence in the state. 70 government buses were damaged in this violence. Bombs were thrown at many places. Shops and business establishments were forcibly closed. Many people were injured in stone pelting. The police have arrested more than 500 PFI workers in connection with the violence.