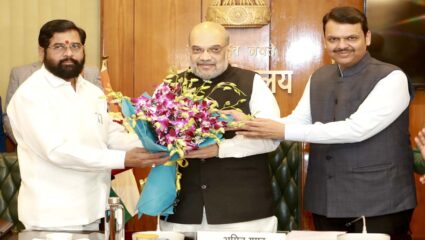 Mumbai/Delhi: The brainstorming session has started in Delhi regarding the cabinet expansion of the Shinde-Fadnavis government of Maharashtra. On Tuesday, CM Eknath Shinde and Deputy CM Devendra Fadnavis reached Delhi to participate in a program related to cooperatives. Where he met Union Home Minister and Amit Shah, who is in charge of the Cooperative Department.

According to sources, the special thing is that Amit Shah did not have a one-to-one meeting with Shinde and Fadnavis. It is being said that the Union Minister wants to know what is the different opinion of the two ministers regarding the cabinet expansion. Along with this, Shah has also taken feedback from the CM and DCM on the ongoing internal politics of Maharashtra. Earlier in Mumbai, along with Shinde, Fadnavis had said that the cabinet expansion would take place before the budget session of the state legislature. In such a situation, it is believed that the auspicious time for cabinet expansion may come soon.

These MLAs are waiting for cabinet expansion

Many MLAs of the Shinde-Fadnavis government are angry at not being made ministers. In such a situation, these MLAs are eagerly waiting for the cabinet expansion, so that they too can get a chance to become ministers. These MLAs include Sanjay Shirsat, Yogesh Kadam, Pratap Sarnaik, Sanjay Gaikwad, Suhas Kande and Bharat Gogavale from the Shinde faction. Apart from this, Independent MLA Bachchu Kadu is being considered as a strong contender for the post of minister. The names of Sanjay Kute, Ashish Shelar, Gopichand Padalkar, Ram Shinde, Nitesh Rane, Devyani Farande and Praveen Darekar are being discussed for the post of ministers from BJP. The discussion of cabinet expansion was in full swing before the winter session of the Maharashtra Legislature, but it was postponed in view of the hearing in the Election Commission and the Supreme Court. However, once again there will be a hearing in the Election Commission on January 30 regarding Shiv Sena’s election symbol Dhanush-Ban. At the same time, on February 14, the Supreme Court is going to hear the petition related to the demand for disqualification of 16 MLAs of Shinde faction.