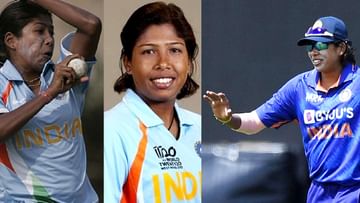 Smriti Mandhana, Harmanpreet Singh’s favorite Jhulu-di will play her last match on Saturday. At the traditional Lord’s Cricket Ground known as the Mecca of Cricket.

Kolkata: Debut in international cricket in 2002. After that, Jhulan Goswami was the face of women’s cricket in the country for 20 years (Jhulan Goswami). He was like the shadow of a banyan tree. One of the most important parts of Indian women’s cricket history. Saw many ups and downs. Smriti Mandhana, Harmanpreet Singh’s favorite Jhulu-di will play her last match on Saturday. At the traditional Lord’s Cricket Ground known as the Mecca of Cricket (Lords Cricket Ground). It is virtually impossible to sum up the success of Bengal’s pacers in women’s cricket in a few words. Let’s take a look at some of the best and most important moments of Jhulan’s career before bidding farewell to twenty two yards.

Born in 1982, Jhulan Goswami’s first love was football. The 1992 World Cup took all his attention away from the gentleman’s game. Kishori Jhulan got a chance to see cricket up close in the 1997 Cricket World Cup. Jhulan was the ball girl in that World Cup on Indian soil. Australia’s captain Belinda Clark turned Jhulan’s head. Chakdaher Jhulan started dreaming of playing cricket for the country.

Jhulan developed himself as one of the fearsome pacers of Bengal. His excellent performance in domestic cricket opened the door to the national team. Jhulan made his international cricket debut against England on 6 January 2002 in an ODI match held in Chennai. The story of the right-arm pacer becoming a legendary cricketer begins.

Spent three years in the national team. People started to know Jhulan Goswami as the cricketer of the Indian team. It came to be known as ‘Chakda Express’. 2005 is the dream year of Kishori Jhulan. India reached the final in Jhulan’s first World Cup. Jhulan took 13 wickets in the tournament, although his dream of winning the cup was dashed by losing to Australia.

Jhulan concentrated on batting the year after the World Cup. Hard work paid off in 2006 in a Test match against England. Jhulan’s half-century and India’s first win in this format, both happened together. The precedent of taking five wickets in one innings in the second match of the series. The following year, the ICC Women’s Cricketer of the Year award went to Jhulan.

In 2008, the Bengal pacer led the Indian team in place of Mithali Raj. For three years, Women in Blue was fairly successful under Jhulan’s leadership.

Earlier this year, she became the second player in the history of women’s cricket to complete the milestone of 200 ODI matches. She achieved this feat during the Women’s World Cup in New Zealand. Mithali is the first woman cricketer in the country to achieve this feat.