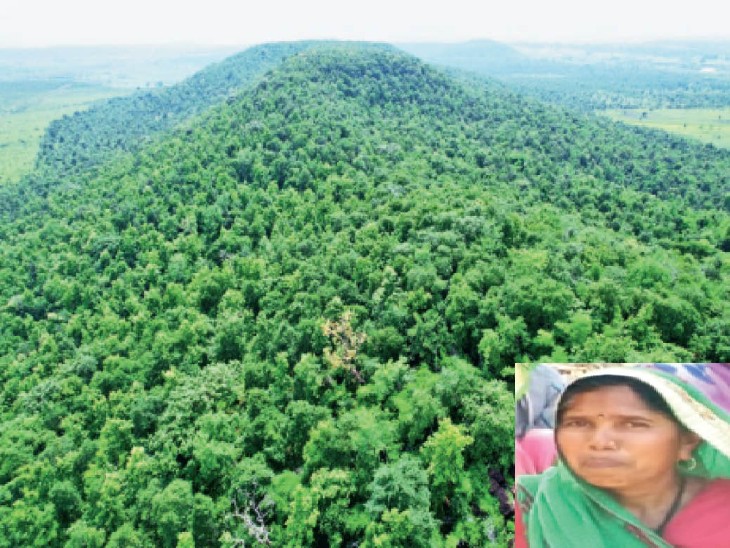 Suruti Bai, who has been stopping the felling of trees for 20 years on the highest Hirapur hill in Guna district, patrols daily. Only one case of illegal felling was registered in Hirapur area in three years.

While forests are being cleared, a tribal woman in Guna district laid down her life to save trees. Surutibai, who lives in Hirapur village, has been protecting trees for 20 years. Due to the initiative and fearlessness of Surutibai, today the highest (573 m) Hirapur hill in Guna is green. Imran Mian, the beat guard of this area, says that in the year 2000, the felling of trees was going on continuously on this hill. The hill had become deserted. Only a few trees were left. Jungle mafia was active, people were in awe of them.

In the forest hunters used to hunt animals along with harvesting. Suruti Bai of the village also made other villagers aware to save the forest. First started patrolling the hill by forming a team of five women from the village. Then gradually men also started joining this campaign. After stopping the harvesting, today more than one and a half lakh trees are green on this hill. Seeing this fearlessness of Suruti Bai, in 2003 the Forest Department made her the chairman of the Forest Committee. Suruti Bai added 10 other members to this committee from the village itself. Now the whole village protects the hill of Hirapur.

Teak worth more than 50 lakhs on the hill, bamboo worth up to four lakh rupees comes out in two years

Vivek Chaudhary, Ranger of Guna South Range, says that there are many species of green trees including Sesam, Teak, Neem, Chirol, Gurjan, Kanji, Amla, Chironji, Tendu, Belpatra, Tamarind on the hill of Hirapur. All this was possible only by stopping the felling of trees. At present the cost of Saugan trees on the hill has been estimated at Rs 50 lakh. Harvestable trees will be auctioned by marking them, while every two years up to four lakh bamboos come out of this hill. The income earned from them is deposited in the account of the Forest Committee. Ranger Vivek told that only one case of illegal felling has been registered in this area during the last three years.