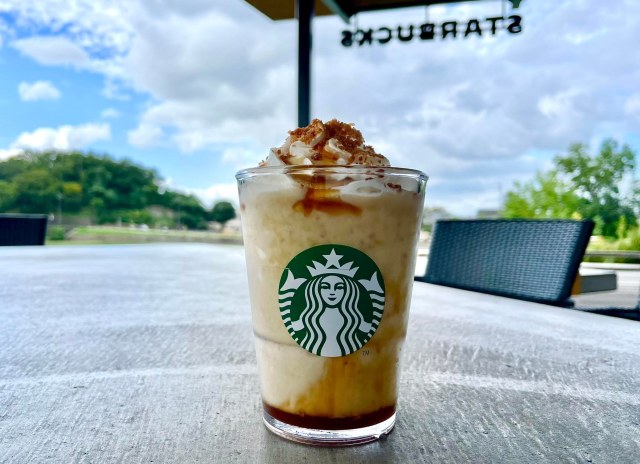 Is it worth stopping by Starbucks this fall?

This year, the coffeehouse chain is blessing local customers with a seasonal harvest, in the form of two new limited-time beverages: the Pumpkin Spice Lat And these Yaki Imo Brûlée Frappuccino.

Our resident Starbucks expert Kei Masami was first in line to try the new drinks as soon as they were released on September 21st, and she couldn’t resist trying the Frappuccino first.

▼ At this stage, “Frappucino First” should really be Masami’s tagline.

Yaki imo is one of those flavors that screams “Autumn!!” In Japan, and that Frappuccino sings its praises from the first sip. The sweet potato brûlée sauce and brûlée chips make a sweet, creamy, crunchy start to the drink, easing us into the party of potato flavors below.

Inside, a sweet potato syrup dances with ice and milk, a caramel-flavored sweet potato syrup, Allowing the yaki imo to sparkle and shine on the palate. From all angles, the spotlight always remained fixed on the sweet potato, but the clever addition of caramel helped to make it taste as delicious as a real crème brûlée dessert.

It was sweet, filling and delicious, but for those who prefer a more warming start to the season, the return of the Pumpkin Spice Latte will be happy news.

Despite being a fall staple in overseas locations like the US, In the US, the Pumpkin Spice Latte only appeared in Japan last year after a 15-year absence. It has proven to be popular enough to warrant a return this year, and the now familiar Cinnamon, GingerAnd Nutmeg Flavor profile makes for a delicious start to the season.

▼ Both drinks make it worth a stop at Starbucks this season, but for Masami, it’s the Frappuccino that stole her attention.

Photos © SoraNews24
● Want to hear about the latest articles from SoraNews24 as soon as they are published? Follow us on Facebook and Twitter!
[ Read in Japanese ]